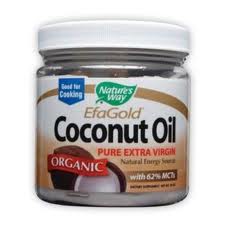 A few weeks ago I put up a blog chatting about homemade chicken tenders made with coconut oil, that Nick can't get enough of. What I didn't mention is, I opted for coconut oil not just because I know it's good for you, but mostly because Nicky has been known to go into the pantry and eat scoops of coconut oil straight out of the jar. Which causes me to make that "yuck...that's gross face" and in turn I've made him stop. Seem's his body might have known something, all this time, that I didn't. Something like, coconut oil is good for me.

I just watched a video talking about how coconut oil has improved the lives of people living with Alzheimer's disease.  As I watched, I was thinking the friend who sent it to me must of been thinking it was just good information to spread around. Then I kept listening to how the oil was positively affecting brain function and thinking to myself "I wonder if it would help Nicky"?. I continued to listen and before the video ended they mentioned Autism and Epilepsy!!!   Wow, I am so keeping it on hand and feeding it to him every day.  Heck I would rather experiment with coconut oil than pharmaceuticals!

Posted by Donna Ross-Jones at 8:35 PM