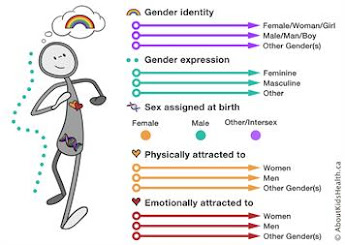 This entire topic makes my head want to explode. This on top of Nick's autism is a lot to think about! But here goes!!!

Since birth I have looked at my child, and labeled him all things associated with his sex assigned at birth, male.

As the parent of a child with autism, my child does not have the social, emotional or language skills to express feelings on everyday matters, much less something as complicated at this.

Nick's disability has removed him from typical social interactions. Nick goes no where alone and has no friends who are not family, therapist or others in a special needs community. So, there are no clues there.

Nick's disability also means that I have made the choices when it comes to clothes and activities which traditionally might give me clues to Nick's gender identify. That said, Nick has never walked into the store with me and picked up a dress and asked to buy it.

Like all parents I want Nick to live a full and happy life. I'm an adult with a lifetime of experiences behind me and a desire to understand. Still this is complicated in my mind I have to constantly fight against my lifetime of social programming. As I am learning the degree to which the world is not simply Boy/Girl I want to help Nick to live a life feeling understood and seen when it comes to sex, gender and physical attractions. Since we cannot verbally discuss this, my first step has been to observe Nick. Here's what I have so far.

1. Nick's gender identify and sex assigned at birth all appear to be male.

2. Nick always wants to talk to the girls, and Nick tends to ignore the guys. Nick has that usual physical young man reaction to girls he finds attractive, so I'm confident where his physical attractions lie.

3. I have absolutely no idea who he is emotionally attracted to. It might be female because of his strong connection to me. However, at this time I do not know for sure.

Beyond that I am clueless.  Nick lacks the capacity to have an emotional discussion, much less verbally identify these complicated emotions.

Below is an easy read on the topic for others trying to wrap your heads around this.

Gender, like autism, exists on a spectrum. In the 1990s, as growing numbers of children sought care related to their gender identity, clinicians and researchers began to notice a trend: An unexpected number of these children were autistic or had autism traits. The observation has spurred researchers to work to quantify the association.

The field is beginning to get a clear picture of the extent to which the two spectrums overlap: Gender identity and sexuality are more varied among autistic people than in the general population, and autism is more common among people who do not identify as their assigned sex than it is in the population at large — three to six times as common, according to an August study1. Researchers are also making gains on how best to support autistic people who identify outside conventional genders.

Here we explain what scientists and clinicians know — and don’t know — about gender and sexuality in autistic people.

What is gender identity?Gender identity is a person’s internal sense of their own gender. People who identify as the sex they were assigned at birth are called ‘cisgender,’ or cis, whereas those who do not may use terms such as transgender, nonbinary or gender fluid. Researchers often use the phrase ‘gender diverse’ as an umbrella term for different gender identities, similar to the way some people use ‘neurodiverse’ to describe variations in cognitive style, including autism and attention deficit hyperactivity disorder.

How common is gender diversity among autistic people?Many studies have examined the prevalence of gender diversity among autistic people. One of the most frequently cited studies found that about 15 percent of autistic adults in the Netherlands identify as trans or nonbinary; the percentage is higher among people assigned female at birth than among people assigned male, a trend seen in other studies2. By contrast, less than 5 percent of adults in the Netherlands’ general population have an identity other than cisgender3. And in a 2018 study in the United States, 6.5 percent of autistic adolescents and 11.4 percent of autistic adults said they wished to be the gender opposite of what they had been assigned at birth, compared with just 3 to 5 percent of the general population4. This study also found that, on two measures of autism traits, higher scores were associated with a higher likelihood of gender diversity. A 2019 study found a similar association in children who are not diagnosed with autism5.

Sexuality also appears to be more varied among people with autism than among those who do not have the condition. Only 30 percent of autistic people in a 2018 study identified as heterosexual, compared with 70 percent of neurotypical participants7. And although half of 247 autistic women in a 2020 study identified as cisgender, just 8 percent reported being exclusively heterosexual8.

Why is the prevalence of gender diversity higher in autistic people than in the general population?Social experiences are likely a main component, experts say. Compared with neurotypical people, autistic people may be less influenced by social norms and so may present their internal selves more authentically. “You could then understand the co-occurrence as perhaps a more honest expression of underlying experiences,” says John Strang, director of the Gender and Autism Program at Children’s National Hospital in Washington, D.C.

It’s possible that autistic people may come to conclusions about their sexual identity differently than neurotypical people do, says Jeroen Dewinter, senior researcher at Tilburg University in the Netherlands. Some autistic people have told him they would be likely to identify as bisexual after one same-sex sexual experience, but neurotypical people may be less likely to adopt that terminology based on a single same-sex encounter.

Biological factors may also play a role. Exposure levels to hormones such as testosterone in the womb may be linked to autism, some research shows; increased prenatal testosterone may also lead to more typically ‘male’ behaviors and to less common sexualities and gender identities, although there is some evidence against that link9,10. Regardless, prenatal testosterone does not explain why autistic people assigned male at birth might identify as more feminine, Dewinter says. But the biology of sexuality and gender in the general population is not well understood either.

Experts say it’s likely that a combination of these and other factors contribute to the increased variety of gender identities and sexualities among autistic people.

What does this mean for clinicians and caregivers?Clinicians who work in gender clinics may want to screen for autism, and those working in autism clinics may want to discuss gender identity and sexual health, researchers say. They should also be sensitive to different information processing styles, Dewinter says. Some autistic people may struggle to express their feelings regarding gender. Even when they do express these feelings, they often face doubts from clinicians because of stereotypes about autistic people, which can block their access to medical care. In a 2019 paper, one autistic and gender-diverse person wrote, “The combination is seen to be too complex for the majority of clinicians, which led to long waiting times for specialized psychiatric care”11.

Screening tools may also need to be updated to better identify autism among gender-diverse children, just as they need to be adjusted to spot the condition among girls. “Clinics are working to understand what autism looks like in girls and women, and we’re going to have to take that same question with the gender-diverse youth,” Strang says. Identifying autistic children who may need support in affirming their identity is particularly important because some may seek medical interventions, such as puberty blockers, that are time-sensitive, he says.

Clinicians should be aware that autistic people may present their gender identity differently than neurotypical people do. Some autistic people who transition from one gender to another are not aware of how they also need to change their social cues, such as how they dress, if they want to clearly communicate their gender identity to others. Clinicians can help autistic people navigate these transitions and ensure they have the same access to gender-affirming medical care that neurotypical people have, says Aron Janssen, associate professor of psychiatry and behavioral sciences at Northwestern University in Chicago, Illinois.

How do autistic people best learn about gender and sexuality?For years, many parents and caregivers believed that autistic people, particularly those with intellectual disability, shouldn’t be given information about sexuality and are less interested in relationships than neurotypical people are, Dewinter says. That belief is changing as researchers recognize that providing relationship support is important to ensure the overall well-being of neurodiverse people, just as it is for neurotypical people. Belonging to any kind of minority group makes a person more susceptible to mental health problems, because of a phenomenon known as ‘minority stress.’ For a person who is both neuro- and gender-diverse, belonging to several minority groups can intensify those problems12.

More comprehensive and inclusive sex education can help. In ongoing surveys, Eileen Crehan, assistant professor of child study and human development at Tufts University in Medford, Massachusetts, has found that autistic people want information about sexual orientation and gender identity more than typical people do. Research has shown that lesbian, gay, bisexual, transgender and queer/questioning (LGBTQ+) adolescents who have more inclusive sex education in school have better mental health. But only 19 percent of U.S. sex-education materials are LGBTQ+ inclusive, according to the advocacy group GLSEN, creating an extra barrier for autistic LGBTQ+ people. “You have two hoops to jump through to get the information that you need,” Crehan says.

Where is the research going next?Early research focused on measuring the prevalence of diverse gender identities in the autism community — and vice versa — but now researchers are increasingly turning to questions about how best to support autistic people who are gender-diverse. To do that, they’re working closely with the autistic community, ensuring autistic people guide research priorities. “I really think it’s incredibly important to lift up the voices in the community themselves, and I’m grateful to see that’s where the field is going,” Janssen says.