How to Make Sure Kids With Autism Reach Their Potential

Slow and steady and never give up!

When Nick was 8 years old a behavioral agency informed me they would be ending his program. When I asked why, I was told in their professional opinion he had plateaued. 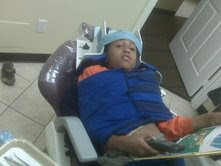 I will never forget how this so called expert stood before me, straight faced , emotionless and explained how children with Autism reach their potential around age 5 after which they don't expect to see much progress or significant change and they believed this to be he case with Nick. I was so angry. I literally yelled at her "Plateaued!!!. On what planet does any human plateau at 8!"

How dare anyone who is charged with helping children, pass this information on as if it was fact. If I had been another mom, I might have believed this "Expert" and given up right then and there and robbing my child of the opportunity to become his best self. Instead, I refused to let anyone tell me my son was without potential and his developmental life was over. I mean who writes off an 8 year old!
I am so glad I did not listen, because she could not have been more wrong!
For the past 21 years we have worked everyday to expand Nick's capabilities and it has paid off. When he was 8 going to the dentist meant being totally restrained. Today he sat in the dentist chair unrestrained, as the doctor drilled and filled his first cavity. Not a scream, or a dangerous wiggle, or any breaks to get the job done!
I know his progress does not look like a typical kiddo, it looks like Nick, slow and steady, up and down, forward and back, but in the end all small steps forward. Our goal is to help Nick become as independent as possible and the version of him he can be, not he best version of anyone else. We constantly introduce new things, repeat known things to help him achieve mastery. We always keep in mind, just because he didn't like it at 6, doesn't mean he won't like it at 8 or 10. Or just because he couldn't do it at 12 that doesn't mean he won't be able to do it at 20. We just keep going slow and steady until suddenly we notice a thing... 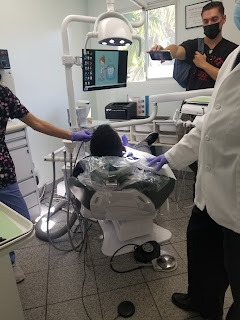 "Nick followed 3 multistep instructions independently."
"Nick used a full sentence, unprompted."
"Nick did great in the dentist office today."
"Nick made breakfast all by himself."
"Nick was not aggressive today."
"Nick offered to share his food."
"Nick just worked independently for 1 hour."
"Nick figured out how to work the paper shredder by himself."
"Nick made his bed without any assistance."
"Nick did all of chores without any prompts."
These success's may not sound like much to all parents, but for me and Nick they mean the world, literally. Every one of these achievements is directly connected to Nick's independence and his independence is connected to his quality of life including how much time he spends in the community.
It has not been easy. That said, he had not plateaued then, and at 23 he has still reached his "Plateau".  Nick is a human being and just like the rest of us, when given the opportunity to learn he will. It's been a lot of work for me and Nick, but I am so grateful I didn't accept that my 8 year old Nick had plateaued.
Posted by Donna Ross-Jones at 2:58 PM